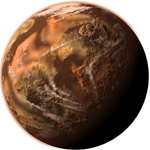 Korriban is the ancient birthplace of the Sith. The Dark Side of the Force has always been an intricate part of this world and its ecosystem, with many of its native species having evolved a symbiotic connection with the dark and mystical energy permeating the planet to its very core. However, it was the red-skinned humanoid natives known as the Sith who had mastered Korriban's inherent darkness and bent it to their will.

Long ago, even before the founding of the Galactic Republic, the ancient Sith species emerged from the sandy, rocky wastes of Korriban as its apex predator. They mastered the harsh and unforgiving elements of their homeworld and spread across its surface, their priests and warriors uncovering the mysteries and power of the Dark Side. In the centuries and millennia that followed, many of the native Sith left Korriban for other worlds in the Stygian Caldera, like Ziost or Dromund Kaas. Despite this, the Sith's original homeworld remained a holy site, with their dead rulers and greatest warriors buried in the legendary Valley of the Dark Lords, which still stands today. While the Sith people are now extinct, their legacy lives on in the teachings and philosophies of the Dark Side adepts who have named themselves after the Korriban's red-skinned natives: the Sith Order.

Throughout galactic history, Korriban has often been regarded as the birthplace of evil and the spawning ground of the horrors that have plagued the galaxy. Nearly seven thousand years ago, in the aftermath of the Hundred-Year Darkness, the legendary Jedi Exiles landed on Korriban, subjugated the Sith species, and formed the incarnation of the Sith Order and Empire that most in the galaxy are familiar with. Similarly, it was from Korriban that Naga Sadow struck against the Republic and Jedi during the Great Hyperspace War, nearly bringing both to their knees. Throughout the eons, the Sith would often rise and fall on Korriban, whether it was during the Jedi Civil War or the Great Galactic War. Regardless of how the Sith were reborn, or who led them, the ancient birthplace of their order always remained a coveted symbol that they sought to hold and claim, while the name of Korriban often stood synonymous with "evil" to the rest of galactic society.

Many would argue that Korriban's innate ties to the Dark Side are reflected within its barren and inhospitable landscape. Much of Korriban's surface is comprised of rocky deserts and rugged wastelands, interspersed by areas of volatile volcanism. Its many canyons, caverns, and caves are inhabited by dangerous and deadly creatures, such as the lethal Pelko bugs, the leather-winged and razor-taloned Shyrack, and the hound-like Tuk'ata guarding the imposing entrances to the ancient Sith tombs in the legendary Valley of the Dark Lords. Some claim that Terantateks — a monstrous Sithspawn created by Dark Side alchemy — still roam the Valley's tombs. It is therefore a testament to the will and strength of those who have settled on Korriban in the past and present, as the ancient capital of Dreshdae is no longer the only settlement on the planet. Large parts of the rocky wastes have become heavily urbanized in recent decades, their citizens protected from the harsh elements and the deadly dangers of the wilds by high walls and defensive emplacements. As a result, Korriban is unlikely to be forgotten and abandoned into the annals of history anytime soon, with many fearing what evils and horrors the world may unleash in the years and centuries to come.