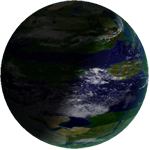 A rare terrestrial giant, planet Mandalore is one of the largest orbital companions of the star Trnar, connected to the Hydian Way by the Mandalorian Road trade route in the Outer Rim Territories. The planet and its moon Concordia are the original sources of beskar ore, commonly known as Mandalorian iron, one of the densest metals that occurs in the galaxy. Known to its inhabitants as Manda'yaim, this rich and balmy world is the cradle of Mandalorian culture.

The lithosphere is composed of two major plates, the northern continent Olankur and the southern continent Tokursh. The basin between the continents is filled with seawater, the tidal Sho'cye Nelvana which is fed by the Kelita River. Where the continental plates converge, a ridge was pushed up, forming a chain of equatorial islands known as the Kranake. The tropical belt is hot and damp, characterized by towering galek rainforests speckled with amber ferns and varos trees, reeking frond-grass marshes, and open fields of bas neral dotted with fragrant vormur blossoms. Further inland the climate progressively becomes cooler and more arid, giving way to veshok forests where mushrooms and behot grow in abundance, until the chilly dunes of the white sand deserts are reached at the poles.

Mandalore was first colonized by the Taung, who came from Roon in 7000 BCGT and hunted the colossal mythosaurs to extinction. The planet was named after their leader, Te Sol'yc Mand'alor. Having secured a new homeworld for themselves, the Taung reinvented their identity as the Sons and Daughters of Mandalore, or Mandalorians. From Manda'yaim they methodically expanded their influence, conquering the remaining planets of the system. As the offworld campaigns dragged on, fewer Taung remained behind on Mandalore and by the time of the Great Shadow Crusade in 3996 BCGT, Mandalore was only sparsely populated. Te Ani'la Mand'alor returned later to recruit the Neo-Crusaders into his army, which now included Twi`leks, Humans, Rodians, Togorians, and others who adopted the Taung way of life. But the conflict ended in disaster, and when the routed survivors began to trickle back to Manda'yaim, the Taung were no longer among them.

Without a strong military presence, pirates and criminal cartels became active across the derelict Mandalorian territories. After being ravaged by the Blue Shadow Virus in 1060 BCGT, the population of Manda'yaim was in distress and the warlord Aga Awaud championed the Yaim'ol, calling the splintered clans from across the galaxy to return to Manda'yaim and unite against the raiders that threatened the peace and security of the Mandalorian homeworld. Thus the gangs were driven out and Mandalorian civilization was revived and began to experience new prosperity. But the industrialization of Mandalore and the rise in imported militancy alarmed the Galactic Republic and in 738 BCGT the Jedi led a massive strike fleet against Manda'yaim. The force attacked without warning and much of Mandalore's surface was reduced to a barren wasteland in the conflict known as the Dral'Han. During the Republic occupation of the planet that followed, the Mandalorians were forced to reform their military traditions, adopting a more diplomatic approach to foreign relations. The cultural revolution was not without controversy, and some clans fled offworld in protest while the remaining Mandalorians continued to rebuild and maintained their allegiance to the ascending Galactic Empire.

The government of Mandalore eventually withdrew from the Imperial Union in Year 13 CGT and became more isolationist. As wardens of the planet, they revere Manda'yaim as their ancestral home and carefully maintain its ecological balance. The Mandalorians protect this symbolic world with great zeal, and foreign visitors can expect to be met with some hostility.