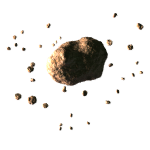 This asteroid is Mysterious Asteroid 12248 just like many other in this asteroid belt. The asteroids of the anzat system are quite a site for anyone to see. One could assume that these might be leftover galactic dust from the formation of this system, or they could have one of many other possibly origins.

The asteroids in this belt surround the planets in this system like a vale of protection. Making trips to and from the planets quite dangerous, but this also serves as a very useful defensive aid. People wishing to attack Anzat would have to bring fleets of ships across this belt of asteroids which would indeed be a perilous journey.

Historians only record once that an asteroid crashed into the only moon in this system. This caused a catastrophic event that caused major environmental problem on the planet for a short period of time. This fallowed a near seven day long blackout after the asteroid impacted in the mountains.