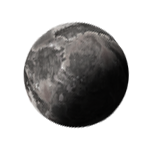 Alg`trle is Ket`alis only moon. It is fairly small, and made up of rocky terrain with a few craters on the surface. The moon has historically served as a waypoint for travelers to Ket`alis, due to it's close proximity to the planet. Alg`trle serves as the main warehousing of "Hawk Rum" which is stored in large facilities built in the moon's craters. The aging process of the fire-water makes the rum have a rich and sweet tangy taste. An experienced logistics team is on the surface, as well as on a station in orbit coordinating the delivery of this expensive and rare rum to all corners of the galaxy.