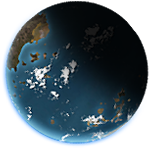 Bal`demnic is a large planet covered almost entirely in water. The atmosphere, made of mostly nitrogen, oxygen, and carbon dioxide, is crucial to Bal`demnic's ability to support life. Although the surface of the Bal`demnic contains only a single island chain, volcanic activity in other parts of the planet could potentially form new landmasses. There is an outpost on the island chain that houses a research and development team from Tresario's ship manufactuer – Cerberus Corporation. Cerberus takes advantage of the low population to test the latest ships and components designed in the massive R&D stations in orbit around the planet.