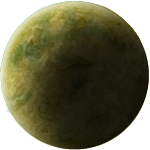 The lone planet in a system of the same name, Panatha is an expansive desert world with jungle oases spread across its surface. The extreme and sudden divide of the planet's biomes results from the towering, almost vertical sides of desert topped mesas. The steep inclines force winds to rise quickly, causing precipitation as the upper air cools, which in turn creates a humid climate ideal for vegetation growth. This effect, however, leaves the leeward side dry, hot and inhospitable to most forms of life.

The planet Panatha serves as homeworld to the Epicanthix, a race of near-Human warriors isolated to one of its jungles. The species has been reluctant to interact with explorers, so in recent history, sociological exploration has begun in an attempt to gain additional insight into their history. Newly recovered cultural items have generated theories that the Epicanthix conquered Panatha during the Clone Wars and established their culture there, likely abandoning their previous territory. The harsh climates of the desert regions then drove them back from their once expansive foothold to a single area they call Tree City, where they now remain in nearly complete isolation.

Over time, however, the system's ruling government has donated massive amounts of funds to establish new population centers, including the capital, New Tree City. To support this planetary development, various outposts dedicated to moisture farming are now scattered across the world. While some groups hoping to preserve the desert wildlife and history have protested the attempts at urbanizing the vast open spaces.