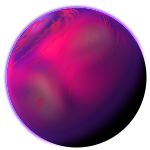 The closest planet to the Chasin system's blue-white sun, planet Chasin is a helium and methane giant. A fairly large planet, even by gas giant standards, it is bombarded continuously by a huge quantity of ultraviolet light from the star. This radiation, along with the blinding white light during the day, makes heavy photonic radiation protection a must in the cloud cities of planet Chasin. The planet also rotates extremely quickly, and orbits in a relatively close-in orbit, with a typical day comprising only 8 standard hours, and the typical year lasting only 310 standard days.

Periodically, when conditions are suitable, small steam pathways will open up through the methane, participating in the creation of lattice-like electrical storms that can extend for hundreds of kilometers. The cities floating high in planet Chasin's atmosphere are heavily armored, radiation-shielded, crystal-like domes designed to protect their residents from these phenomena.

Occasionally, if one of the buildings in a city suffers a sealant breach, the high-temperature gas outside (temperatures in the atmosphere at city-level range between 380 and 480 Kelvins) will instantly ignite with the release of oxygen, generating a massive explosion that can cause huge amounts of damage. For this reason, there are strict mandates enforced to maintain a careful separation between the interior and exterior environments.