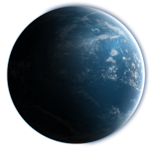 Its surface covered entirely by water due to the gravitational effects of two orbiting satellites, for most of its history, Manaan had no urban areas visible from space. Its dominant species, the Selkath, preferred to live in underwater caves or city "pods"; that is until these natives gained a hugely significant role as the most important medical supplier of the known galaxy.

The Selkath are amphibious humanoids, despite never being exposed to dry land during their evolution. For millennia they had produced the miraculous healing substance known as "kolto". The Selkath extracted kolto's base material from the jagged rifts of the planet's deep oceans. After it underwent numerous refinement processes, which were kept secret by the Selkath, the chemical creation that resulted was used in much the same way as bacta is now.

Some speculate that the potency of kolto was inextricably linked with a legendary monster known as the "Progenitor", the creature who had initially formed the raw kolto. This beast then was not only responsible for sustaining Manaan‘s impressive economy but is also said to be a direct ancestor of the Selkath species. For these reasons it was, and still is, revered as a religious icon. Unfortunately for the Selkath, their primary resource was eventually superseded by bacta, after its invention on the planet Thyferra. Harder to produce and a less effective alternative to bacta, kolto could no longer compete in the galactic market and its galaxy-wide distribution ceased, ending the high status that had once been held by a mostly unremarkable oceanic planet. It is argued by some, however, that bacta's discovery coinciding with the end of kolto production was merely a coincidence. There had long been accusations, especially from within Manaan, that greed had led to over-production which had completely depleted the sources of raw kolto even before the market collapsed.

Kolto, which had once been the most important resource of the planet Manaan and perhaps the entire galaxy, was exploited by the Selkath to bring them not just wealth, but also to benefit those sentient beings who would likely live longer when treated with the substance. This thinking resulted in the creation of the ancient Ahto City, built primarily as a starport where the Selkath could easily export their kolto and import the goods of a vast galaxy. To ensure the kolto was distributed equally to those in need of it, the Selkath had sternly retained a stance of neutrality, refusing to take sides in even the most important of galactic affairs.

Ultimately, as kolto production declined so too did the planet's importance. Manaan has slipped into relative obscurity with diminished status as a beautiful, yet forgotten orb hanging in the blackness of the Inner Rim.