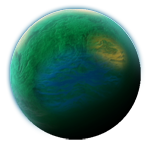 Cathar is the solitary planetary body orbiting the Cathar Prime sun. During the formation of the system, the majority of the accretion disc was pulled into the newly forming star and there was only enough material left to form the one planet. The planet itself has very few high areas and has a flat, featureless visage when viewed from space, but on the approach more variations in the terrain could begin to be observed. The enormous trees that were clustered mainly in the southern hemisphere of the planet were one such feature; their size was rumored to rival that of the Wroshyr trees on Kashyyyk. The native Cathar called these trees "city-trees" since their huge size allowed them to use them as a basis for their homes, and many native Cathar cities can only be accessed by repulsor-equipped craft, or by using one of the many lifts that the natives have erected around their trees.

The rest of Cathar was naturally covered in flat, grassy plains, with just a few rolling hills here and there, but a voracious insectoid species, the Kiltik, had reduced much of its northern section to desert. These insects live in large nests underground and come out at night to gather food and bring it back to the nest to feed their queen. Omnivorous, they do not discriminate between vegetation and other animals, but take all. This makes them a deadly threat to the natives and is the main cause for the Blood Hunts that are used by the Cathar to gain honor and also to rid themselves of the inner darkness that they all believe they have within themselves. Cathar warriors go alone into a Kiltik nest and attempt to wipe it out, battling through hundreds of guard drones before reaching and killing the queen.

The remaining areas of grassland left on the planet were of great interest to the Cathar and have been called the Vast Veldt. This is because the entire area was devoid of unique features, except for a few low-lying bushes, and the grasses were all that sustained the abundant wildlife proliferating in this area of the planet. Due to this concentration of fauna, many Blood Hunts were performed here to allow younger, less experienced warriors to test themselves before they were sent to the harder Kiltik nests further north. The openness also allowed the Cathar to hunt together, allowing them to goad each other into greater acts of honor, and to watch out for each other. One of the creatures they hunted was the Eeeyonk, a large hopping, bipedal creature with its back legs much larger and more developed than its front legs.

Incidentally, the entire planet has only one large body of water on its surface, and in galactic terms, it is relatively small. It only interacts with a small portion of the land, and this accounts for the lack of polar regions. The desert areas to the north, that were created due to the voracious appetite of the Kiltiks, have had their problems exacerbated by this lack of a readily available, nearby supply of water, which has resulted in the north being uninhabited for the majority of the planet's history.

Much of the native population of Cathar was displaced following the Mandalorian Wars. In more recent times, however, these refugees have begun returning to their homeworld and there has been a marked increase in the planet's population; although it remains unknown how much sentient life the planet can hold without support from other systems. When a dark and mysterious group of beings took control of the system it turned Cathar into one of their main bases of operations within the Quelii sector. But with their strong sense of culture and proud, warrior heritage, the Cathar have pulled themselves back from the brink of extinction and proved formidably resistant to outside influence.