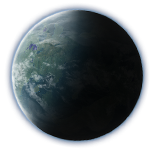 Colonized very early by the profit-mongering Neimoidians, this planet soon developed a reputation of exclusiveness and wealth very few planets hold. It has the honor to be one of the "Purse Worlds"; prosperous colonies where only the rich and most extravagant of the Neimoidians can live.

The world's surface is blemished by a massive and sharp mountain range. There are some small valleys located at the equator, where some tropical vegetation flourishes in a colorful parade every few months. Around these green depressions, the geography becomes harsher. Moorlands become the predominant habitat, with a few undernourished trees sprinkling the rocky and acidic surface. Beyond them the mountains reign.

Tall and jagged, these formations stretch far above ground. They are made of solid rock and are gently caressed by the swirling white clouds. It is here where the Niemoidians have funded their extravagant cities.

Constructed in a most peculiar way, these "bridge cities" spawn from the mountain itself. The civilian and administrative facilities have been built above these metropolises in the form of inverted arches. Despite the height, the air currents are of no menace to the integrity of such buildings. The twirling billows around the high skyscrapers only contribute to the already-beautiful design of the edifices.

The architecture of the planet reflects the owner's taste: lavish surfaces with golden details, crafted and designed by the most elite (and costly) artists. Exotic fabrics from all over the galaxy can be seen across the streets. covering some of the walls, and bizarre and sumptuous devices are in almost every house. Obviously, clothing is quite strict, as only the most extravagant garments and adornments are seeing in this place. Poor people are frowned upon and usually deported.

Deep inside the mountains, the greedy and resentful inhabitants have built enormous vaults to protect their most valuable assets. But they have also placed harsh security systems to discourage any potential larceny.