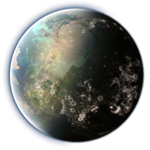 Deko Neimoidia is a hot planet located in the Rachuk Sector. The planet has extensive grass prairies bathed by a single, gigantic river. There is a small desert near the northern pole heated by an active volcano that exudes golden ash constantly. This ash is later transported to the grasslands where it is deposited, fertilizing the soil.

The planet was colonized very early by the Neimoidians who established an agricultural colony. They imported manax trees from Pure Neimoidia and began the extensive plantation of the grasslands. They brought harvester beetles to help them with this task, and the economy of the planet boomed as one of the prime suppliers of fungus.

The humble pilgrims were soon replaced by power-hungry landlords with many contacts inside the central Neimoidian government. Pulling some strings and laying some pressure in the right spots, Deko became one of the first purse worlds and the honor to hold the name “Neimoidia” with it.

The planet became fairly independent since then, and only the wealthiest and more extravagant of the Neimoidians can afford to live in this agricultural paradise.