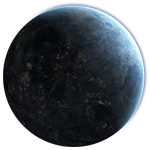 Few planets in the universe are made up almost entirely of ice. Unlike the most famous, Hoth, Spinax II used to be a lush jungle planet that nurtured a variety of exotic plant life and interesting wildlife. That is until a catastrophe in the atmosphere destroyed the ecosystem entirely and caused the planet to become another frozen chunk of rock in the universe. The terrain consists of large snow-capped mountains to ice fields that rival the expanse of the sand dunes of Tatooine. It is a harsh place to live and an even harder place to thrive.

Spinax II's climate is extremely harsh and permits only the toughened and insulated to survive on the surface. Extremely violent blizzards that bury entire continents and the near ninety-kilometer winds slash across the frozen tundra on "warm" days. The average temperatures during the day never come within forty degrees of freezing

A true oddity that only calls Spinax II home, is the Sea of Gel'nash. Discovered by a foolish smuggler named Hyt Gel'nash, the Sea of Gel'nash is a vast wasteland with fast-moving glaciers. Many studies show that beneath the fifty-meter thick slabs of ice that cover the wasteland is a raging water current that causes them to constantly crash into each other. When a collision occurs it precipitates rippling quakes across the icy surface that decimate anything caught in their path. Gel'nash built his hideout on one of the ice slabs. During the planet's short night cycle, the current brought two ice flows to smash into the poor smuggler's hideout, killing Gel'nash in his sleep.