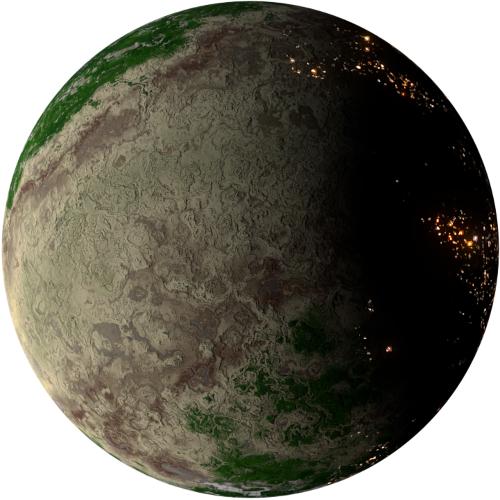 Chenini is the third moon of the planet Tatooine. Unlike most moons, it has a large elliptical orbit and because of this unusual behavior, Chenini was missed during the first few Hutt surveys of the Tatoo system. Tusken Raiders and Jawas, however, had always been aware of the moon, though at the apogee of its orbit it is four million miles from their native planet of Tatooine.

Tusken Raiders have often thought of the moon as an omen for good or ill. Many of their rituals are timed to coincide with its appearance in the night sky and which generally conclude at the time when the moon is full. It is said that one such ritual ended at the moment of their attack on Tusken Fort, where they decimated the early human colony. The exact nature of these rituals still remains a mystery to foreign observers. Jawas, meanwhile, use the movement of Chenini to predict the storm seasons of Tatooine and use these predictions to time their annual swap meets.

Also unique is Chenini's face, which shows little evidence of the cratering scarring the other moons of Tatooine.