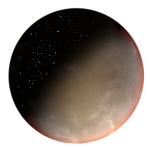 Year 21 Day 63: Due to the increasing prosperity of STARFIGHTER's autonomous production centres on Homon, and subsequently the settlements constructed to house workers there, the overall economy under Flower Company, has substantially weakened, while STARFIGHTER has prospered and convinced the locals to elect them to the new ruling position.