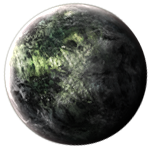 Suspended in the luminous, billowing plasma clouds of the Extrictarium Nebula, a dense field of rocky debris called the Thicket obscures the mysterious rogue planet Iego, known to the more superstitious as Maelibo. The planet's gravity silhouette binds the Thicket together, a thousand terrestrial companions spinning through ionized gases; forty-two of them large enough to land a freighter on, eleven of these having sufficient mass to possess gravity of their own. Shrouded in eternal night and heated by the energy of an ancient hypernova, Iego has grown to host some of the galaxy's more modern megalopolises.

Iego was absent from star charts for millennia, and its history is enigmatic due to the difficulty of separating facts from spacer fables. It is not known exactly when the first shipwreck crashed on its surface, but over the ages, a great many vessels foundered on the Scatter, a sweeping valley named for the ruined hulls that once dotted the landscape. Legends state that the Diathim, native to one of Iego's largest moons, lured ships to crash on the planet. However, it is more likely that these stories originated from the shame of coxswains who marooned their crewmates, and it is now generally accepted that sensor interference from the nebula and the absence of sunlight played key roles in the disasters. Over the ages, the population of castaways grew into nine communities with tribal identities, each locked in perpetual competition over finite resources. Many tales originated from the tribes, describing golden demons with hypnotic songs that lived deep underground and devoured unruly younglings, or the myth that castaways lived unnatural lifespans without needing food.

The castaway community was eventually discovered by spice smugglers and was once part of Xim's Empire, although the planet remained isolated and obscure until the native reeksa root was discovered to contain the only known cure for the Candorian plague. Republic traffic revitalized the settlements and brought considerable prosperity to Iego, sparking a period of colonial growth which resulted in the first modern cities. Salvagers stripped the Scatter of wreckage, and in the northern region known as the Boneyard, colossal skeletal remains were excavated and removed by surveyors to make way for new urban centers. During the conflict popularly known as the Clone Wars, Separatist forces exploited Iego's seclusion by using the world as a base but moved on shortly after building fortifications. Their abandoned defenses severely hampered local traffic until Imperial-aligned forces were able to dismantle them and establish order.