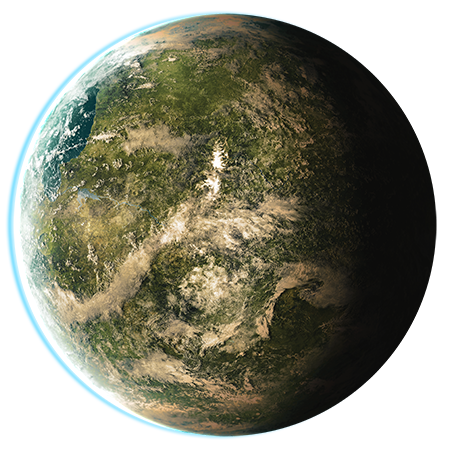 Maridun is a terrestrial planet with a warm, temperate climate and a rich breathable atmosphere. It is a solitary world, orbiting the gravitational axis opposite a relatively dim yellow dwarf star. Tucked away in the Outer Rim, this system has attracted little attention and indeed has even been celebrated for its obscurity. Homeworld of the native Amani race, Maridun has a deceptively low population. But this mostly represents urban settlers, traders and the Amanin who come to the city to barter. There is no industrial activity on Maridun, no mining operations or corporate facilities. The unregistered Amanin will not permit expansion, waging tribal wars against all who intrude upon their sacred hunting grounds.

Eighty percent of the surface is covered with broad, open savannahs which the Amanin call the "Gruntak". These rolling grasslands can be dangerous places and the settlers prefer to avoid them. The Amani tribesmen are fiercely territorial and often fight with one another over the rights to these hunting grounds. Bandits frequently take to hiding in the vast prairies and the Amanin fight with them as well. Acklay, Nexu, Mastiff Phalone, and Sand Panther must be watched for as they are also known to prowl the steppes and can be quite treacherous to encounter. There are three lush rainforests, separated by great distances. Visitors are much more likely to encounter Amanin there, as they live in tree villages similar to what one might find on Kashyyyk or the Forest Moon of Endor. High up in the jungle canopy, they are safe from the Acklays, Charnoqs, and Rancors that roam the forest floor. A tectonic ridge along the center of the planet's mass has pushed up three rocky mountain ranges which are said to be inhabited by dragons and sentient butterflies.

Just nine percent of the surface is flowing water, small rivers which drain into two modest seas, the largest of which hosts the planet's only urban development. The north district is the commercial center "Amanaman Station" where the interstellar starport is located. The residential district is on the south side, called "Mos Gruntak". The historical roots of the Maridun settlement have more to do with refugees than colonization. Maridun is a very old planet with a rich history dating back as far as the Rakatan occupation some twenty-five thousand years ago. Little evidence of the Infinite Empire remains to be found today. Mandalorians sought refuge on Maridun after a war against the Galactic Republic some four thousand years ago and the system was finally mapped about three hundred years later by scouts blazing the Hydian Way. During the collapse of the Galactic Republic, Hutts, Mygeetans, and others began to arrive seeking sanctuary and the town evolved into the modern settlement that can be seen today. Enough commerce takes place that it has attracted wandering merchants and craftsmen from across the galaxy, particularly those who prefer being discreet. This has made Amanaman Station a popular destination in galactic subculture.