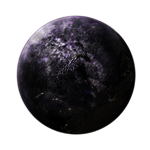 One would have reasonably expected the homeworld of the Diathim, the so-called "Angels", to be a beautiful, enigmatic planet, full of wonder and mystery. The reality is in truth, somewhat more prosaic. Millius Prime is one of the Thousand Moons of Iego, though only eleven can truly be classified as moons. Originally stated as barren and lifeless in Galactic Republic records from about the fifth millennium BCGT, the moon was the site of an experimental terraforming station, designed to give the moon an atmosphere and standing water in order to support life. Over several centuries, this terraforming experiment, operated by the then renowned BioScience Academy of Coruscant, succeeded in creating a thin, breathable atmosphere and small bodies of standing water. The Great Sith War at the start of the fourth millennium BCGT, and especially the Battle of Coruscant, put an end to the terraforming project, destroying the academy complex on the Republic's capital, and resulting in the recall of the terraforming team at the end of the war. Interestingly, records from the time make no mention of any sentient species on the moon itself, although signs of intelligent life were detected on the planet below.

In the present day, Millius Prime resembles a small, undisturbed planet, where fields of hardy yellow grass stretch as far as the eye can see. The monotony of the grasslands is broken by the occasional shipwreck, products of a time when the Diathim were first discovered and ship pilots, who found themselves mesmerized by the glowing creatures, lost control of their ships and plowed into the moon's surface. Most of the lunar terrain is quite arid, with only one major riverine system on the entire surface. Much of the moon's wildlife, imported during the terraforming project, is concentrated near the water, although herds of migratory herbivores and their predators wander the grasslands. The old terraforming complex has been transformed into the sole urban center on Millius Prime, with rural areas surrounding it for several dozen kilometers.

There are no signs of any settlements of Diathim though. The residents of the urban center, also called Millius Prime, make frequent forays out into the grasslands. None have reported any Diathim settlements, though the Diathim themselves are frequently encountered, flying gracefully over the grass and interacting in strange ways with the wildlife. Where they come from remains a mystery.