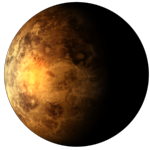 Antmuel III is a small, rocky planetoid that occupies the edge of Antmuel Prime’s inner hot zone, meaning that it is too hot to be habitable without special protective measures. This orbit, approximately one hundred seventy million kilometres from the star, means that average daytime temperatures on the surface are in the range of two hundred fifty standard degrees, which is much too hot to survive without serious thermal protection. The lack of any appreciable atmosphere means that nighttime temperatures can plunge well below negative one hundred standard degrees, meaning that any habitation has to be exceptionally well prepared for these major daily thermal swings.

The planet’s surface is relatively flat, eons of exposure to the baking rays of the system’s primary having created a landscape of hot, dark rock and narrow crevices. The exception can be found around the northern polar region, where massive volcanoes continuously spill lava onto the surface. This lava rapidly cools, creating enormous mountains. Indeed, some of these mountains are high enough that, from certain angles, Antmuel III begins to resemble a teardrop rather than a sphere. This region is even more dangerous during the daylight hours, as the sun’s rays heat up the black basalt, causing temperatures to soar to over four hundred standard degrees. Travel in this zone is not possible except by dedicated, heat-protected vehicles such as lava skiffs.

The population, such as it is, is primarily housed in large domed cities, shielded from the bombardment of solar radiation during the day and insulated from freezing during the planet’s short, six-hour nights. Mining of precious metals and crystals forms the bulk of the planet’s industry, with mining companies vying to extract the most wealth from deep within the blasted rock. A number of local mining cartels have banded together to keep costs down by reducing safety and housing allocations, ensuring that the lives of the indentured miners are fraught with danger at all times. Resistance to these brutal measures has led to a large number of disappearances among the mine workers, and tensions constantly swirl below the surface.