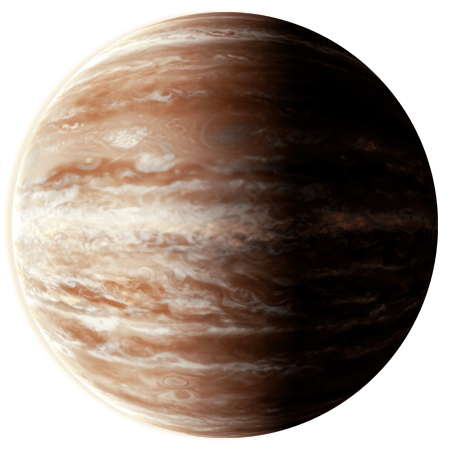 As gas giants go, Wynkahthu isn’t really a giant, at least in size, but it has the pull of one. The planet inhabits an outer orbit of the system’s sun and makes a complete orbit every sixteen point nine standard years. This, coupled with the fact that the planet revolves quite slowly – a solar day lasts three hundred and nineteen standard hours makes time seem to pass very slowly for the small number of sentients who crew the tibannagas harvesting rigs that dot the planet’s surface. These harvesting rigs represent the only manned structures on the planet and even then, the crew prefer to run the rigs by remote operation from orbit as much as possible to avoid the planet’s crushing gravity, which stands at three point four times standard gravity. This makes working on the surface even for short times terribly uncomfortable unless some form of exo-frame or powersuit is used. A fully enclosed environment suit is mandatory in any case, as the mixture of gasses in Whykahthu’s atmosphere is inimical to almost all life, with one notable exception.

This exception was discovered by the galaxy at large in the wake of the inaugural Galaxy Fest, held in Year 21. Following the influx of sentients to the Bright Jewel system to take part in this seminal event, the overseer of the mining operation saw an opportunity to rid his operations of a pest infestation. Putting out a call to the participants of the recently concluded festival, he invited enterprising individuals to make the short journey to Wynkahthu to take part in a hunt of epic proportions – a hunt which introduced the galaxy to the purrgil. These previously unknown colossal creatures congregate on the planet’s surface in large numbers, feeding off the gasses especially the green gas Clouzon-36, and represent an operational hazard to the mining operations.

A single adult purrgill can be more than thirty meters in length, although there are individuals that can reach a much greater size, and can weigh as much as a star freighter. Dozens or even hundreds of these leviathans can be found on the surface of the planet, occasionally bumping into and damaging the harvesting rigs. Following the call to the hunt, more than two hundred of these massive creatures have been culled, making tibannagas harvesting operations somewhat safer, although there are still large numbers of these creatures on the planet, which so far remains the only place in the galaxy that the purrgil can be encountered with regularity. Time will tell if the post Galaxy Fest cull will jeopardise the future of this species, but several conservation groups have started making efforts to reduce the hunting to a more sustainable level, although no one is quite sure what this constitutes yet.