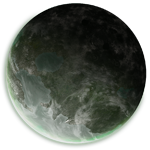 Serenno is a low tech planet of various climates. There is a major ocean with a landmass that is about 12% of the planet's size. Most of the center of the landmass is forests with some plains scattered around where people have built farms to support themselves and the cities. Cities are located around the oceanfront and near the rivers. There is only one major spaceport, but some private owners have spaceports built around their houses. Serenno is also a small paradise where some wealthy people retire to live out the rest of their lives in peace and quiet. The Imperials had set up a base for some time on Serenno, killing some locals just to intimidate the population, but have pulled out and left the base unused and overgrown with plant life.