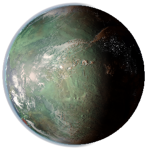 The planet Manda is a very lush and humid world, with plant life thriving all across the surface. A strange axial tilt makes the northern hemisphere much warmer than the southern, so while the north is dominated by swamps, jungles and deciduous forests, the south is primarily dominated by glacier, tundra, and an expansive alpine forest. A large area of volcanic and seismic activity in the southern hemisphere renders about a tenth of the planet uninhabitable. The source of the tumultuous activity is unknown and scientists point to the absence of any significant mountains on Manda or volcanic activity elsewhere on the planet to demonstrate a likely lack of tectonic plates. The leading theory focuses on external forces, hypothesizing that whatever created the large crater at the border of the southern glacial and volcanic regions could be the cause.

Historically, the planet’s size and location along key trade routes have made it wealthy and a prime target for colonists and invaders alike. Manda has been subject to numerous battles by competing Sith and Republican governments over the millennia, though from 1000 BCGT until its fall, the planet was a member of the Old Republic. Following the outbreak of the Galactic Civil War and the subsequent breakdown of galactic trade, Manda was left impoverished, with millions fleeing to seek the stability of some of the larger governments or to avoid the chaos of nearby Hutt Space. The planet was briefly run by JUGANOTH Mining Corporation, who maintained small mining and production operations on the planet. They ceased operations after raids by the Eidola Pirates, operating from Hutt Space, ensured that they would never be profitable. This left Eidola as the de facto rulers of the planet, though they mostly left the locals alone if they made their tribute payments.

In 10 CGT, a group of Mandalorian exiles, led by Kai Oryk, settled on the planet. Bringing wealth and security, with them many on the world were drawn to their lifestyle. A brief internal power struggle between pro and anti-Mandalorian factions in the existing local government saw the pro-Mandalorian supporters victorious, who wasted no time in handing over the world to the Mandalorians. The planet was renamed Manda soon after for the ancient Mandalorian concept of an afterlife. Under the new leaders, domestic policy has largely been one of conservatism, restricting industry and urban growth in an effort to protect the planet’s vibrant ecosystem. Additionally, the world was opened to settlement by other Mandalorian exiles, and population has seen a steady rise from those who view Kai as the rightful leader of the Mandalorian people.