The Pursuer-class enforcement ship is a formidable gunboat capable of surprising any unaware attackers in mere seconds. Capable of out-running almost every freighter available to public, it packs a considerable punch.

Shaped like a long, thin rectangle, the Pursuer-class is stabilized in flight with port side wings and a maneuvering cluster housed along its keel. Its dual heavy lasers, located under the cockpit, turret-mounted ion cannon, and military grade shield grid allow the Pursuer's pilot to take on dangerous foes. The lack of a sensor pack and turbolaser batteries, which are impossible to power along with the shields, makes it vulnerable to fast attacks, but in the hands of a skilled pilot it has been proven to be a formidable weapon.

Widely used as a police vessel on border worlds, the Pursuer was gradually adapted for prisoner transport, with brig compartments placed in the aft part of the ship. The addition of these secure accommodations have led to it becoming a fixture in bounty hunting society. 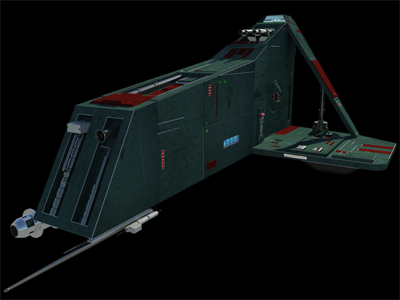