Built by the now defunct Pelagian Shipyards, the Pelagia Duplex Command Assault Gunship was designed with specific purposes in mind: defense and modularity. These were key cornerstones that aided the Tapani in protecting their sector during the Great Sith War. It was so efficient that it even earned the nomicker of "Tapani Murder Machine" from enemies that dared attack them.

The Pelagia Duplex Command Assault Gunship sports some rather unique features, such as two cockpits and redundant piloting controls. This allowed each officer to take command of the piloting controls at any given time. Additionally, the port and starboard offensive capabilities of the ship were divided as well. The ship can carry up to eleven passengers, which includes droids and pilots. There are also heavy lasers, two on each side of the ship.

After the Great Sith War had ended, these ships remained as holdovers in home system fleets. As time passed, the Pelagia Duplex Command Assault Gunship was sold or traded to small merchants and mercenaries looking to add an extra punch in their fleet. Though these ships seem ancient to some, their modularity and ease of modification are favored by those willing to put forth the effort to maintain and upgrade these aging machines. 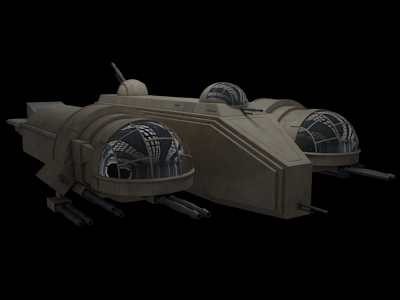