In the days of the Old Republic, most Outer Rim worlds were left to raise their own forces for the law enforcement of space lanes. The weak local economy at the frontier of space often meant the area was more susceptible to pirates and smugglers. One of the many products created to tackle this issue was the D5-Mantis patrol craft. Designed to be powerful, fast, and durable, the Mantis had a reputation as a formidable opponent in a head-on confrontation. That reputation, combined with an ability to disable targets with its ion cannon, also made the Mantis popular with bounty hunters of the era.

However, the Mantis was too expensive for many of the governments it was designed to serve. The few that were able to purchase one soon fell into hard economic times and had to sell off their state-of-the-art ships to stay solvent. Many of those ships were bought up by the same pirates who had prompted their development in the first place. Eventually, the Outer Rim worlds that had commissioned the Mantis Patrol Craft were forced to watch as their own creation was turned against them, spreading more fear and chaos throughout their space lanes.

Nowadays the Mantis is a rarity found primarily in the hands of mercenaries and bounty hunters, or nostalgic individuals wanting to invoke the spirits of legendary hunters who used the craft. The D5-Mantis patrol craft is now often considered a symbol of an adventurous age, when the Outer Rim was at it's most rugged and dangerous. 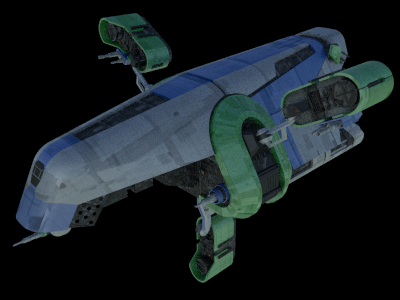