An ancient design, the hammer-headed hull shape of the Class VI Bulk Freighter has been seen in the galaxy for millennia. The Class VI is a Praetorian-class Frigate with the majority of its weapons removed and its engines downgraded for civilian operation. A positive aspect of the conversion is that it drastically reduced the number of personnel required to handle piloting and navigation. The spartan crew is housed in the bow of the ship, with crew quarters and storage space limited to maximize the Class VI's cargo space.

There are two noticeable downsides to the Frigate conversion, however. At 180 meters in length, the Class VI Bulk is a behemoth. Coupled with the smaller engine system, it is quite slow and sluggish, especially when laden with cargo. Also, it was left with only a single heavy laser for defense, which rarely proves enough firepower to deter pirates from attacking to capture the cargo in its enlarged holds.

Despite the time it takes for the ship to deliver, the Class VI can store an astounding amount of cargo. For corporations with small fleets or freelance pilots, this is a boon, but those needing cargo delivered as soon as possible may want to look elsewhere. Though antiquated, the Class VI Bulk freighter can still be seen working in the galaxy. Most can be found in transport fleets, though some are also employed by governments with gunships to protect them. 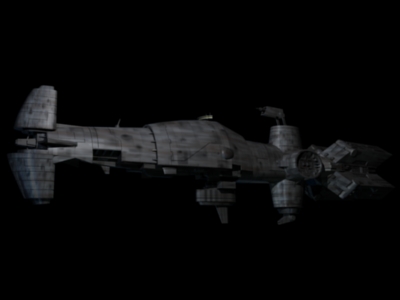