The HCT-2001 Dragonboat-class freighter was one of the major products of Gallofree Yards dedicated to individual customers. Designed initially as a high-end light freighter, a number of additional features and changes evolved the ship into a heavy freighter. An expert's eye can easily notice several distinctive elements left by designers towards the end of this Galactic Republic-era company.

Despite being classified as a heavy freighter, it is quite fast and agile for its size. These levels of speed and maneuverability have been achieved through the installation of powerful engines on either side of the bridge, as well as a limited payload capacity. An added feature of the engines is their rear-breaking thrusters, which increase safety and navigation at the same time. Another particular factor is the bridge, which is located on the stern, similar to the GR-75 medium transport.

Although not heavily armed, a single rotary laser battery was installed on the stern of the ship. This addition effectively protected against most pirate raids and contributed to overall protection, while often gaining appreciation from most private entrepreneurs. Nevertheless, some owners have decided to strengthen the ship's safety by installing additional defense systems. The backbone of this vessel connects the bridge with the cargo compartment and these modules are partially exposed on the sides. Like other freighters built by Gallofree Yards, the Dragonboat is well equipped and designed for minimal personnel. In this case, two pilots and a gunner are enough, but the crew can count up to fifteen individuals to provide more frequent watch rotations.

After Gallofree Yards was absorbed by the Rebel Alliance, the modularity of the unsold HCT-2001 Dragonboat-class freighters attracted slavers, hunters, and resistance groups looking for an edge in their respective fields. While conglomerates, where larger heavy freighters are more economical, rarely use this ship. Recently, because of its outdated design and growing problems with spare parts, some of those owning a Dragonboat resold them to private collectors or other entrepreneurs, although mostly to those who can't afford a better ship. 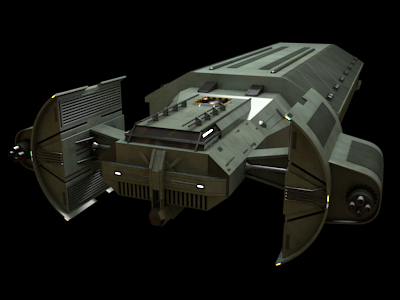