The prototype Spacecrawler was not so much developed as improvised by the Jawa Uuutideday Clan, who cobbled the ship together from a less-than-adequately-guarded stockpile of Corellian scrap. A testament to Jawa ingenuity, the design attracted much attention despite the criticism of professional shipwrights. Many of the makeshift solutions found on the original ship, essentially a converted Sandcrawler, have since been re-engineered to operate with more reliability and efficiency. Most noteworthy would be the inclusion of an 812-R fuel distributor and the installation of a more dependable NB-3101 cooling system.

A wide bar SRB42 engine provides respectable sublight travel speeds, coupled with an Avatar-10 hyperdrive for interstellar transit. While lacking a military sensor suite, the Spacecrawler is outfitted with forward hardpoints that mount twin ion cannons, ideal for disabling and capturing hostile craft. A magnetically shielded frontal loading ramp offers access to the Spacecrawler's hangar and docking bays, while the addition of a tractor beam permits salvage to be pulled directly into these interior decks for processing.

The distinctive trapezoidal crawler profile, which is less than ideal for atmospheric flight, and classic rear Corellian fan combine to make the Spacecrawler a highly recognizable vessel. Design embellishments such as a shield generator, stable repulsor actuators, and actual landing gear have addressed some of the original flaws and the result has been a highly versatile passenger and cargo hauler that has enjoyed unexpected popularity. 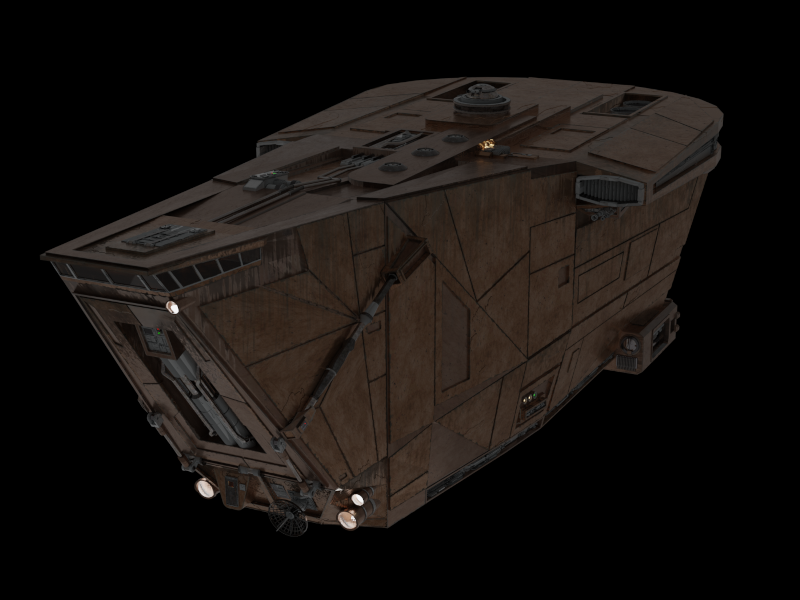