Originally developed to move large amounts of cargo around the Old Republic capital, the AA-9, also known as the Botajef Freighter-Liner, has a number of features that make it well suited to working in the crowded and narrow confines of the planet-wide city. Its deep, narrow, wedge-shaped hull makes it easier for the ship to load and offload cargo at small docks between buildings, while the broad rear-mounted engine mountings protrude into the airway. A surprisingly large amount of cargo - comparable in fact to the cargo capacity of a GR75 medium transport - can be loaded via the huge doors at the front of the hull. The ship's manufacturer's also installed a very accurate maneuvering and proximity control system to facilitate operations in confined spaces and reduce the chance of collisions in Coruscant's busy skyways.

In an effort to boost sales, the original designers also equipped the ship with a modest hyperdrive. While its performance is nothing to write home about, this capability has seen the AA-9 sold in several other core systems and even make the occasional appearance further out. The lack of any defensive armament, however, makes this ship unsuitable for duties outside the secure confines of the core worlds, as it can neither run from any hostile ships nor defend itself in an emergency.

The ship does, however, boast an unusually efficient life support system, capable of supporting up to 100 passengers at a time, which is high for cargo freighters. Enterprising captains can earn some additional credits by serving as regular passenger transports while ferrying cargo between systems. These life support systems were heavily strained during the outbreak of the Clone Wars when many of these ships were pressed into Republic service and outfitted to transport up to thirty thousand refugees at a time. These ships have since been successfully reintegrated into civilian service. 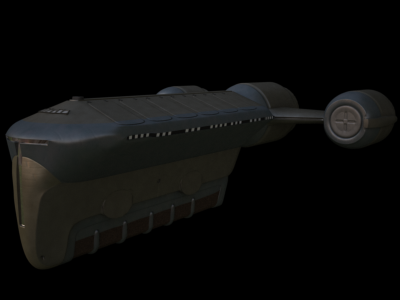