Designed to be worn with a paired set of royal armour, the Falleen Federation royal helmet's history is as long and rich as its counterpart. The helmet's appearance reflects its relationship with Falleen's nobility, sporting a purple, gold, and black colour scheme normally reserved for the planet's noble clans.

With a plasteel-based design and a heavily-padded lining, the royal helmet provides the wearer with strong protection from direct attacks. The helmet's design is based on a hemispherical shape with a short aventail to protect the neck and side of the head, but has an exposed face due to its ceremonial nature. A longitudinally-mounted crest runs across the top of the helmet; the standard royal guard crest consisted of a number of gold fins, but noble clans often modify the helmets to display their own crests.

The Falleen Federation royal helmet is a rare sight in the galaxy, with the Federation only issuing the armour and helmet set to Royal Guard units, leaders and elders of the noble clans, and high-ranking members of the Federation government. This means that sentients who receive this honour are generally considered to be among the upper echelons of Falleen society, receiving a great deal of respect from the Falleen Federation's citizens. 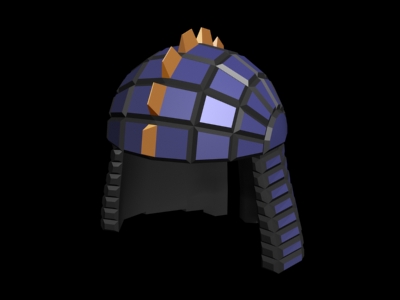