Stormtrooper helmets are made of a composite armour that is constructed using a four layer design. Its outermost layer is formed of the same white, plastoid alloy used in the Stormtrooper body armor, which is a hallmark of the soldiers in the Galactic Empire. Its iconic shape is primarily designed to disperse kinetic blows across the entire structure of the helmet, reducing the force at any individual point. The helmet does not sacrifice functionality for aesthetics, as even the coloration plays an important role in protection; the white pigment is specially designed to reflect many laser frequencies, reducing damage to the wearer.

The helmet's second layer is made of a durasteel alloy mesh that provides further protection against laser energy. The third layer offers magnetic shielding to protect against the radiation and various other detrimental effects caused by electromagnetic fields. The final and innermost layer is a cellular padding to cushion the wearer against head injuries from vibration and high impact.

Built-in comlinks are tongue activated and can be programed to a specific frequency with transmission encoding for security. As a fail safe, these frequencies are automatically deleted if the helmet is removed without the device first manually deactivated. A speaker is also linked to the comlink for external audio projection and some are set up to distribute and receive both visual and audio data.

The helmet has a holographic heads up display (HUD) to allow for easy viewing of sensors and scanning results. The dual display screens focus the visual information directly on the wearer's retina. Text overlays can provide additional information, such as environmental conditions and the status of the helmet's breathing filters.

To optimize combat vision, the visor lens uses a Multi-Frequency Targeting and Acquisition System (MFTAS) to improve visual acuity during adverse conditions, such as low light and smoke. The lens is minimally polarized, contributing to the black coloration and yet still allowing the wearer to see normally under most circumstances. Additionally, the polarization automatically reacts to protect the wearer against intense glare or flash blinding. 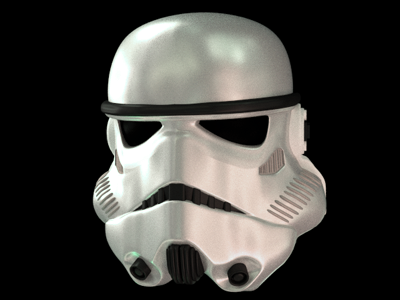