The katarn, a huge reptomammal native to Kashyyyk, is considered a sacred beast within Wookiee culture. At their Hrrtayyk ceremony, also known as the Test of Ascension, young Wookiees are often given the task to hunt this beast, which they call the "Old Prince". According to Wookiee lore, katarns were created in the aftermath of a great "wound" that was inflicted upon Kashyyyk from the sky. The legend says that at first Wookiees were hunted by katarns, which in time unlocked the Wookiees' rrakktorr, their "inner fire and strength". After this achievement, the Wookiees started to hunt their former predators, as an act of honor and respect. However, each hunter always has in mind that someday this hunting game will be turned again and then it will be the turn of katarns to hunt Wookiees once more.

From head to tail, the katarns have a hard hide-covered slender body ending at a rodent-like tail, which provides balance while running at high speed or jumping between trees. Its narrow face is protected by a thick layer of bones and spikes, protecting not only the head, but also their neck and shoulders. Their strong legs have paws with opposable digits, and their lower limbs are covered with sharp spurs, which aid them in getting a good grip on the bark of the great wroshyr trees of Kashyyyk.

Being ferocious and merciless predators, katarns can track their prey for long periods of time before choosing an opportune moment to strike. This methodical beast stalks its prey from the middle levels of the layered ecology, leaping from branch to branch as it hunts its chosen meal. It is because of this persistence and agility that Wookiee dragon troopers use domesticated katarns as war-mounts. 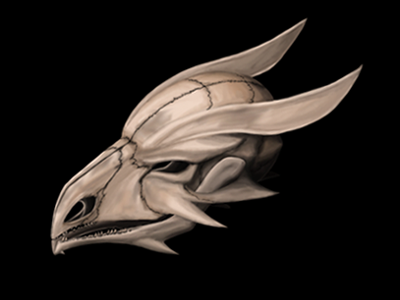