The Kom'rk Transport is an assault transport built to punch through enemy lines and move small numbers of troops into battle. The ship's name is derived from the Mando'a for "gauntlet" and was designed by dissident MandalMotors engineers working alongside Mandalorian rebels. The ship's numbers across the galaxy are small and sightings of the assault craft are rare.

The most notable aspect of the Kom'rk is the distinctive wings capable of rotating during flight and folding upright while landing. This allows the Kom'rk a great deal of control. When combined with the powerful acceleration of its engines, the ship is gifted with excellent manoeuvrability.

Despite its impressive acceleration, the assault craft is impeded by average top speeds in both sublight and hyperspace. The focus of power on acceleration and weapons means the ship's sensors also suffer as a result. Regardless, the Kom'rk's main aim is to deal damage in close-quarters dogfights and to allow its onboard troops to perform simple but precise strikes. The ship fulfils this role without the need for strong sensors or a high top speed.

The assault craft comes equipped with sturdy defences and four forward-facing, nose-mounted laser cannons; making it more than capable of holding its own in combat. The sleek, predatory aesthetics of the main body contain a troop pod; created with combat in mind rather than comfort. A quick deployment hatch built into the pod allows jetpack troops to engage in combat from an airborne position without the ship needing to land. There is a small amount of storage available, suitable for small caches of weapons, armour and other vital supplies. The spartan crew quarters provide just enough space for a crew of four and several passengers. 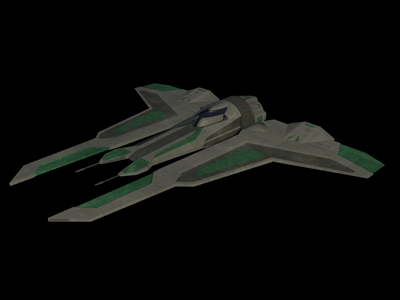