The Herald-class shuttle is a light freighter produced during the Jedi Civil War. Commissioned by the Galactic Republic over five thousand years ago, only a limited quantity was ever produced and the design was later scrapped after the superior Ministry-class orbital shuttle was introduced. However, the Sith Empire later took the Herald-class design and mass-produced the shuttle to carry precious cargo to and from controlled territory.

The Herald design is unusual as the shuttle can carry both passengers and cargo. The cargo bay is large enough to carry speeder bikes or the equivalent amount of precious cargo. While not the most cost-effective transport for its time, starting at 200,000 credits to produce, it was once favored by Sith Lords and Sith Empire convoys for ease of use and effectiveness of fast transport. Multiple heavy and turbolaser batteries give the ship some firepower in combat.

The shuttles are still seen to some degree all over the galaxy. Some of the ships were once used to carry kolto, the predecessor of bacta. But when the use of the shuttle fell out of fashion after the Jedi Civil War, most surviving ships have found their way into private collections. Although some larger organizations still utilize a few within their fleet. Criminal organizations have been known to use them simply for the sheer grandeur of the ship; like the Sith Lords before them, these criminals use the ship's design as a means of intimidation. This rationale has become an effective tool in striking fear into those targeted by pirates, mercenaries and other rogues. 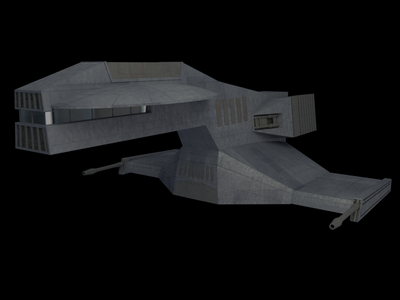