Also known as the Coruscant-class Heavy Courier, the Crescent-X9 was designed many years ago to be an efficient light transport for the Galactic Republic. Combining heavy firepower with surprising agility, the Crescent earned a reputation for reliability that made it a popular choice for Republic pilots and Jedi alike. Commonly used for dangerous missions to the galactic frontier, the Crescent proved its worth in a variety of roles, from peacekeeping missions to simple courier work.

Heavily armed for its size, the Crescent-X9 could hold its own against many of the dangers of the Outer Rim, and its multiple shield generators and a thick hull meant that the transport could withstand significant damage. The Crescent's powerful engine bank, consisting of two sets of engines arranged at right angles to one another, gave the ship impressive maneuverability. Perhaps the Crescent’s most distinct visual feature was its peculiar wing. Set on the right side of the cockpit, the wing was more heavily armored than the rest of the ship, and featured retractable fins that aided in atmospheric flight. The wing also housed the shuttle's small sensor array, and provided access to an airlock used for docking with other ships.

While the Crescent-X9 has been out of production for centuries, many examples can still be found roaming the spacelanes. Despite technological advancements making it somewhat obsolete, the Crescent is still a serviceable ship, and many of the traits that made it well-liked by Republic pilots contribute to its continued popularity. Often used by scouts, explorers, and even the occasional smuggler, the Crescent-X9 remains a symbol of the spirit of exploration and independence that has characterized the galactic frontier. 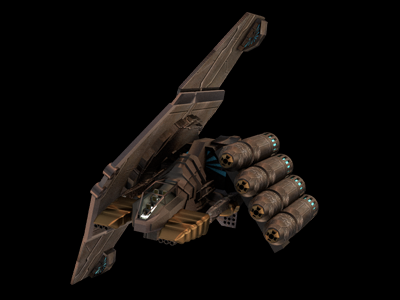