Designed initially as a proof of concept, Project ‘Legacy Arc Runner’ took the Galaxy by complete surprise when it was formally introduced to the market as the YT-510. Designed just years before the Galactic Civil War, the YT-510’s introduction should have been one of the most heralded and anticipated launches of a new freighter in modern history. Instead, it was subjected to a voracious combination of simply being in the wrong place, at the wrong time.

The early prototypes of the Legacy Arc Runner wouldn’t make it close to production. The starship started its life off as a simple proof of concept: How big of an engine can one shove into a freighter. Early prototypes involved installing an oversized existing engine into the smaller freighters chassis. The results were dismal. While extremely fast, handling and weight suffered exponentially. Furthermore, capital class engines were designed for far larger power plants, effectively limiting the ship beyond usability.

The YT-510 found its engine after an act of insubordination and curiosity. The Magnetosphere engine was a brand new, untested engine that had been showing considerable promise for introduction into freighters. Compact and lightweight the Magnetosphere prioritized energy management over speed by virtue of being extremely efficient. A formal application to test the Magnetosphere in the Legacy Arc Runner was at first denied. Undaunted, a custom Magnetosphere was built in secret by the R&D Team behind closed doors.

Moving away from a focus on efficiency, speed and power were made the number one priorities. The lining of the engine, normally an extremely thin veneer of coaxium, was reinforced by several additional microns of the legendary and extremely expensive substance. The results were explosive - an engine capable of propelling the freighter to incredible sublight speeds. Furthermore, the additional durability of the engine allowed for the installation of an aggressive hyperdrive.

The team then turned to fine-tuning the rest of their new vessel. A special lightweight hull was designed specifically for the high-performance ship from a woven combination of duralloy with advanced ferro-ceramic. Realizing that cargo space would be extremely limited, an ingenious quick-connect cargo pod pick-up and delivery system became a paramount feature for the YT-510. Learning from earlier sales mistakes, a capable shield generator was installed. This did, however, come at the cost of any weaponry as the powerplant was simply incapable of providing more.

Galactic civil war soon broke out, overshadowing and marring what should have been a legendary release. Sales orders were cancelled en-masse and demands came from local governments to shift production towards vessels of war. The YT-510 survived however due to the willingness of the manufacturer to lease their data card to other manufacturers, ensuring that a steady supply of 510s were available at launch, and well afterwards. Now, the YT-510 is found all across the galaxy, often in the hands of pilots that are well-heeled enough to shoulder the maintenance costs of one of the highest-performance vessels on the market. 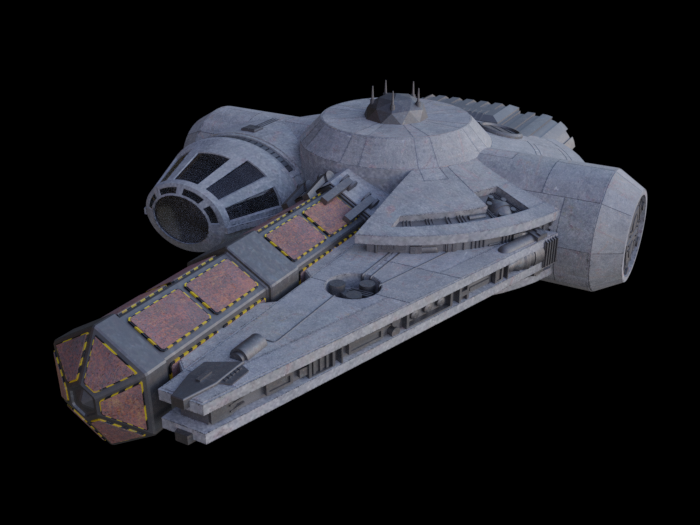