The Sheathipede-class Transport Shuttle was a Nemoidian-designed light shuttle used before and throughout the Clone Wars by the Trade Federation. Though it is equipped with a powerful hyperdrive engine, it was designed to ferry high-ranking officials to and from the orbit of client worlds. During the war years, variants of these shuttles carried military and government personnel between systems, but the quarters were often considered too cramped for more than a day of hyperspace travel. Because of this, the shuttle is often piloted by droids, which do not need to leave the cockpit during flight. Some officials were even known to have droid pilots built into the ships themselves.

The ship's distinct curved hull is engineered to resemble a Nemoidian Soldier Beetle, keeping with the organic inspiration of many of the Separatist ships and vehicles. Like the beetle that inspired it, the ship is equipped with four claw-like landing legs that only allow it to land on hard surfaces. It is rumored that this feature was an intentional measure, ensuring that the dignitaries on board would not have to travel to less-developed areas. Because it was only intended for short-range travel, it has a weaker shield system and was only outfitted with a tractor beam and a set of heavy laser cannons for defense. Today, the Sheathipede shuttle remains a symbol of the Trade Federation as it ferries senior executives and officials around Federation space. 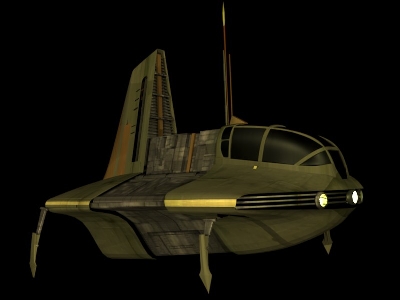