Bacta refills are transparent capsules, made of durasteel and transparisteel, filled with the “miracle healing fluid” bacta. Each refill container is constructed to house bacta for transport in order to supply medical entities and facilities throughout the galaxy.

The bacta that fills each refill is composed of gelatinous red alazhi bacteria, harvested from xoorzi fungi, and synthetic fluids known as ambori and kavam. Ambori is a viscous translucent fluid designed to mimic the vital fluids of countless species. While kavam is a non-reactive, manufactured chemical additive that acts as a buffer and helps maintain the pH levels of the overall solution. Unlike the ambori, kavam is added to protect the delicate alazhi bacteria, rather than to interact with sentient biology. Together, the viscous mixture of ambori and kavam suspend the alazhi bacteria particles.

Bacta shipments have been known to be the target of many smuggling rings throughout the galaxy. As such, many operations have developed counterfeit canisters of similar designs to the refiill, in order to store and transport the drug, ryll. To this end, manufacturers of the bacta capsule have begun arming the containers with various anti-counterfeiting measures, to maintain the purity of the bacta held within. The secrets of these measures are known only to the most privileged corporate employees and designers. 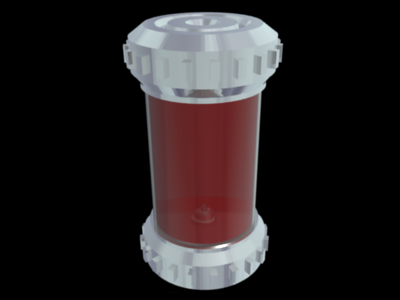