The crowning achievement of BlasTech's DL-series heavy pistols, the Model 44 set the new standard for personal sidearms. Introduced in 33 BCGT and representing the fifth generation of product development, the DL-44 established a clear victory in the "blaster wars" against their competition. It remains a favorite preliminary sidearm of rookies from almost every armed profession to this day.

A generous bottom-loading power pack corrects issues with previous models, feeding energy into a duplex capacitor and tibanna into the fortified Xciter to produce more powerful bolts. Frontal air vents cool the pack and the rear broomhandle grip provides superb control to a broad range of sentient hands. A renowned innovation is the vibrating handle, which alerts the user when the power pack is nearly depleted. Galven circuits deliver a stable bolt with reliable accuracy, further enhanced by the inclusion of a detachable motion-sensing macroscope.

The DL-44's design favors modification, and BlasTech separately offered an accessory kit including a carbine barrel and rear stock attachment. This configuration improved the user interface but does little to enhance the blaster's actual performance. Other custom components which were not offered by BlasTech can amplify the weapon's capabilities although in some territories, illegally. 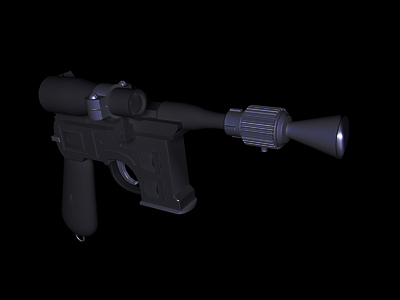