The Amban sniper rifle's most notable features are its curved stock and the forked prongs at the end of its barrel. Although the Amban's origins are unclear, these features and its use by notable Mandalorians over the years have led some to hypothesize that its unusual design harkens back to handcrafted traditional weaponry in that culture's murky distant past. Although rarely adopted by formal militaries, the weapon is now favored by bounty hunters and game hunters alike who prefer the Amban for its ready adaptability and unorthodox design.

While it may be operated like an ordinary blaster rifle, the Amban is actually a dual-phase disruptor weapon. Each time the weapon fires, it emits a pair of powerful energy bolts from the end of the barrel which then pass forward between a pair of vanes at the front of the weapon. These vanes alternate rapid electromagnetic pulses, causing the twin bolts to spin around one another into a "braid" of destructive energy that can maintain its accuracy over longer ranges. A well-placed shot on an unarmored target may result in complete disintegration of all biomass, leaving only inorganic materials behind. This twin discharge comes at a cost, as the Amban uses so much energy that it must be reloaded after each shot.

Beyond its bolt technology, the Amban is remarkably adaptable. While many weapons' stocks are contoured to some degree, the Amban's extreme arc is designed to fit snugly around the front of an armored shoulder, bracing both weapon and pauldron against either the Amban's powerful recoil or any jostling which may occur when firing from a moving vehicle or creature. The stock may be customized to fit a particular user's size and armor and may be of any material the crafter chooses, although various sturdy woods are most common.

Some observers have reported seeing the electromagnetic vanes used to impart an electrical or ionic charge to disable an opponent. While this seems feasible given the nature of the vanes themselves, the Amban's already considerable power draw would make this a challenging capability to install. Even if the accounts are true, this would be a rare custom feature, not found in most production models. 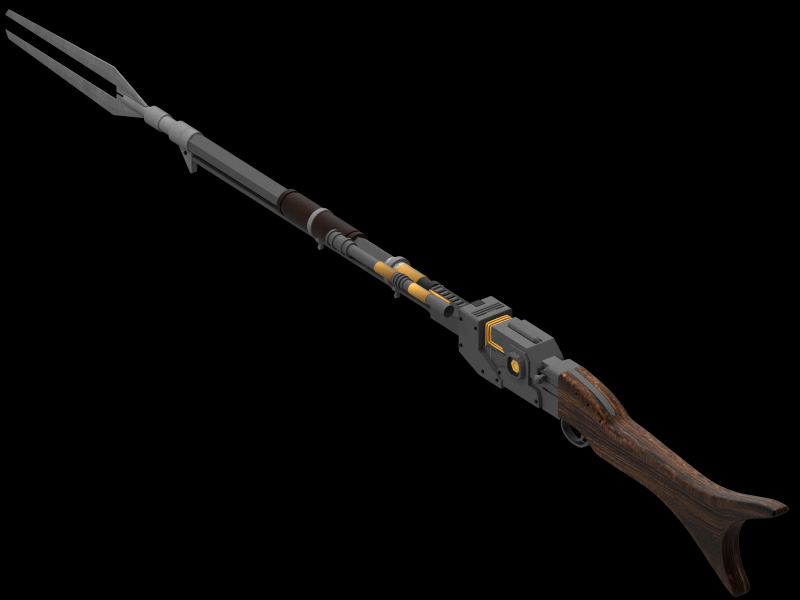