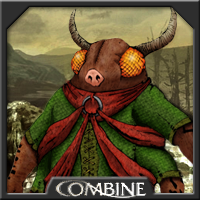 A Bosph is a curious mixture of biology. Their multifaceted eye structure allows for them to see in full spectrum light which is usually more common in lighter sentient species across the galaxy. Yet their stout and general sturdy body is better defined as being thick and possessing four arms. Their stubby porcine nose is especially sensitive to scents and smells, making them curiosities as they can usually sense quick emotional changes in most humanoid races. With their ability to multitask mentally they have developed a keen interest in the complexities of the universe, which haslead them to the inevitable... leaving their homeworld for the stars.

Hailing from the world Bosph, the species Bosph have become known throughout the galaxy as very interesting navigators. Their fascination with stars have inspired many a Bosph to tattoo star maps across much of their body. This method of distinction originally became popular with the rare elite who left their homeworld which discovered faster than light spaceflight early into its industrial age. First defined by these inspirational figures, it became common for many a Bosph who left his or her homewold to tattoo their body with the various star charts that interested them. Such is the importance of tattooing on Bosph that it has become a revered profession where everyday Bosphs strive to be tattooed by their favored astronomers.

While no more specialized than other species in professions throughout the galaxy the Bosphs do tend to gravitate towards space professions. Their cultural love for the stars and exploring has made them seem odd to many who would just consult a droid or data terminal. Yet this does not hold back the Bosphs from their uncanny knack for stellar mapping in intricate detail.

With technology opened to them from other worlds, many who would toil in obscurity on their homeworld, have travelled outward amongst the stars. Indeed such is the quantity of the amount of Bosphs who have left their homeworld that the government of Bosph has restricted how many can go offworld per solar cycle. This restriction has seen a rise of much competition in various forms on the planet Bosph as each member of this race reaches for access to the stars.