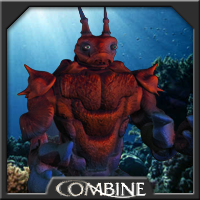 Intelligent crustaceans, the Sauvax are tribal amphibians that evolved in the mildly tidal oceans of planet Leritor. Standing an average of 1.6 meters tall and living for up to 90 standard years, the Sauvax are a reclusive species that is comfortable with high technology, although the needs of their society drove them to develop only the simplest tools of their own. This has contributed to a mistaken impression of the Sauvax as being a dim race.

Sauvax have a thick chitinous exoskeleton covered in spines that serve to snag algae and plant debris in order to help camouflage them from threats. Their heads move freely and feature two bulging eyes and delicate olfactory antennae which provide them with a keen awareness of their surroundings. Powerful arms are crowned with large pincer-like claws, each additionally featuring two small inner digits and a third opposing thumb which enables dextrous manipulation of small or delicate objects. Their mouths, capable of breathing air or water, are also vocal and many Sauvax have learned to speak alien languages in addition to their own. Six robust segmented legs support their bulky armored torso on land, while in water they propel themselves swiftly using twin tails that extend behind them. The overall appearance can be intimidating to some races, which has led to the Sauvax being incorrectly branded as a violent people.

In truth, the Sauvax on Leritor are quite civilized and live peacefully in idyllic beach communities where they fish and practice aquaculture. Individual Sauvax tribes, called "kuuvan", establish their own independent settlements along the shoreline where they raise food sources such as algae, seaweed, and shellfish in tidal pools. Their architecture is typically stonemasonry and includes both open and domed structures, the largest of which is occupied by the chieftain who is called the "tevelor". While generally open to trade and diplomacy, the Sauvax guard the privacy of their villages and do not welcome outsiders near the continental shelf where they live and hunt.