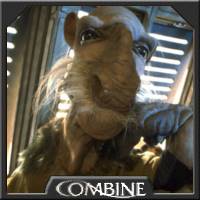 The Yarkora is a bipedal sentient race who calls Carlac, in the Prefsbelt Sector, its home. Facially, they are characterized by their long noses, wide nostrils, and large eyes. It is theorized that their ancestral species had a wider range of skin and fur coloring, but Carlac's abundant desert terrain favored those with lighter shades of brown, thus almost all Yarkora today are of that color. Soft tufts of fur, typically in a color similar to the skin, cover their bodies. They have three digits on their hands and feet, each ending with a hard, if brittle, claw. Their reproductive cycle is long, with one gestation, usually singleton, occurring approximately every 15 standard years. Additionally, females are typically able to carry a child only between the ages of 30 and 60. These factors lead to the species' relatively low population. Redundant key organs such as stomachs, kidneys, and livers give them an advantage in combating the effects of disease and physical trauma, thus perhaps helping to maintain the species despite the low birth rate. The average life expectancy of the Yarkora is estimated to be between 100 to 120 standard years. While those who spend the majority of their lives on Carlac tend to enjoy a longer and healthier life, the reason for this is yet to be discovered.

When compared to other spacefaring sentients, a far smaller percentage of Yarkora travel away from their homeworld. Those who have ventured offworld tend to work as the pilot of their own freighters, either working alone or with one or two crew members of their own species. Because they tend to be quiet and solitary, they are often perceived as shy and meek by those who have little or no contact with them. Those who are more experienced may know that there had been several successful Yarkora con-artists who have gotten away with great riches, but generally speaking, the Yarkora are rarely seen and thus little understood. Those who wish to take advantage of them are often surprised by Yarkoras' keen sense of observation, perceptive nature, and highly effective methods of verbal persuasion.