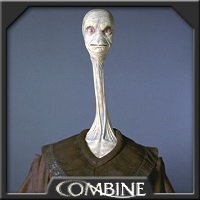 The Quermians are a tall, ghostly white, spindly race from the garden world of Quermia, on the far reaches of the Outer Rim, just at the end of the Perlemian Trade Route. Average members of the species are no less than 2.4 meters tall and have four wiry arms, two of which they would typically keep hidden under their long, flowing robes. Their necks are long and slender, supporting their bulbous, almost skeletal heads. This has led many a Quermian to be mistaken for a Kaminoan, and vice versa. Their eyes are typically red, sunken, and pigmentless. A lipless mouth and two minuscule ears complete their faces; their olfactory glands are instead located on their hands. Quermians have two brains: one in their head and one inside their chest. These unusual brains offer them heightened mental abilities, but also on occasion great mental anguish. The species’ evolution led the two brains to develop distinct personalities. Some xenobiologists hypothesize that their dual brains allow the Quermians a type of telepathy, but this claim is still hotly contested within the scientific community and denied by the Quermians themselves.

The Quermians evolved from a large colony of genetically modified Xexto left on the planet Quermia by the Arkanians roughly 17,000 years ago as part of an experiment. With no natural predators, they thrived there for millennia, undisturbed. While well-natured, the species tends towards cultural isolationism, having been devastated throughout their history by invading marauders or caught in the crossfire of regional and galactic wars.