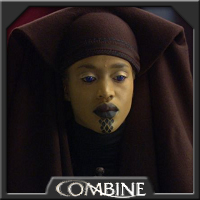 The Mirialans are a species of Near-Humans native to the planet Mirial. Their appearance can vary massively from yellow-green skin to a pale coloration not dissimilar to most humans, but most Mirialans appear to be some variety of green. Their eye color likewise varies, with various shades of blue, green, violet, red and yellow having been recorded - orange is particularly rare, for reasons that have yet to be explored.

Culturally, the Mirialan people are rather spiritual, and practice a primitive understanding of the Force, believing that an individual's actions contribute to their own destiny, as well as the destiny of their race. Common practice dictates that a Mirialan place unique - and typically geometrical - tattoos on their faces to show proof of completing a difficult task, or acquiring a certain level of skill in one pursuit or another. This will usually be done in black ink, but it is not unheard of for other colors to be used. As such, this is often used by other sentients in order to gauge a given Mirialan's maturity or skill. While some Mirialans have been known to acquire other tattoos, it is widely accepted that these have nothing to do with their culture, and are purely for aesthetic appeal.

The Mirialans are naturally flexible and agile, both of body and of mind, something they use to great effect in combat. They are also highly spiritual as a people, and in touch with the world around them, a trait that has given them much ability in the arts of negotiation and diplomacy.

As a race, the Mirialans have largely kept to themselves ever since their initial assimilation into the Galactic Republic, and their forays into the galaxy at large have been rare and few in-between. As an individual, however, it is not uncommon for a Mirialan to travel the Galaxy in a bid to improve on whatever skills they already possess. As such, they are a common sight in all walks of life - from soldiering, to diplomats, to mechanics, to transporting goods across the galaxy. And they almost certainly will remain so for a long time to come.