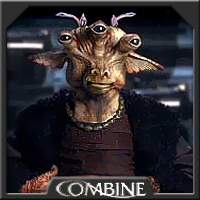 The Gran are a species distinguished by their particular features. They are tan-skinned, with large ears, small horns and three eyes on thick stalks. Their exceptional vision allows them to perceive the infrared spectrum, which, in turn, enables them to gauge the emotional state of other beings through subtle changes in their body heat and skin coloring. Having evolved from a more primitive herbivorous species, Gran maintain two stomachs to store and digest their food. Generally, likely also adapted from their primordial relatives, they tend to eat their food slowly, savoring every bit of it. Goatgrass is a local favorite and considered another vestige of their evolutionary predecessors. Female Gran are distinguished from their male counterparts by having three breasts with which to suckle their young.

The Gran are generally a peaceful race and it has been over 10,000 years since the last conflicts amongst the Gran people. Native inhabitants of the idyllic world Kinyen, located in the system of the same name, they are noted as being warm and friendly. Gran have a well-developed sense of loyalty and enjoy the company of others to the extent that they are unable to remain alone for extended periods. In fact, a member of this extremely sensitive species could sicken or even die of loneliness when denied companionship. Like many other humanoid species, Gran mate for life and their family ties are strong. These bonds and their intense need for socialization result from the Gran's need to band together in their pre-civilization years to protect each other from carnivorous predators.

Gran society is based on a strict career system. Its close observance of social rules ensures that every individual learns to develop the trade best suited to his or her capabilities and talents. Each worker's efforts are geared toward the common good, at the expense of individual satisfaction. A typical Gran places the betterment of society above the betterment of the self, and is aware of his or her role in the bigger picture. The highest form of punishment within the society is exile from the Gran homeworld. Exiled Gran, without other Gran to support them, often die or go insane. Some manage to bond with other aliens, however they are often unreliable. For this reason as well, Gran rarely travel far from Kinyen.

During the days of the Old Republic, Gran's government, consisting of delegates from individual families, established isolationist policies out of fear that Gran emigrating to nearby colonies were destroying familial bonds. While this protected the Gran on Kinyen, the Gran off-world were cut off entirely, which led to a more corrupt society evolving amongst the colonies that is still prevalent today.