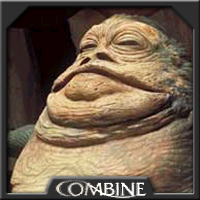 The Hutt are a large, slug-like alien with short, stubby arms, huge eyes, and a wide mouth. They originated on the planet Varl, but have populated a great number of other worlds including Nal Hutta. They speak their own language, and have the ability to see in visible light as well as ultraviolet light. They often light their palaces with both, turning off the natural lighting to give trespassers a false sense of stealth. Despite the sheer bulk of their flesh, Hutts do not have a skeleton. Instead, an internal mantle helps shape the head and support the arms, while the rest of their body is simply one large, snail-like foot.

The skin of a Hutt is incredibly thick, and is covered with a mixture of mucus and oily sweat. This makes the skin able to resist harsh chemicals and even some blaster bolts. Below the epidermis is a thick layer of blubber that helps maintain body temperature and makes it impossible to puncture their skin with a knife. Hutts are also hermaphroditic, often choosing to appear as one sex or the other for the benefit of their audience.

Young Hutts spend their first year of life inside a pouch on their mother’s belly, and are virtually mindless. They live near their mothers for several decades after birth, returning to their pouches when they are scared or tired. Young Hutts aren’t considered accountable until they are well over 100 years old. All Hutts have a given name, which is supported by their clan name and their surname (eg., Jabba Desilijic Tiure).

The history of the Hutt race can be traced to the early times before the formation of the Old Republic. They were a strong force even then, dominating large portions of the space surrounding their homeworld. After the discovery of the hyperdrive, the Hutts began expanding their territories, but ran into Xim the Despot. Xim and the Hutts fought several fierce battles near the uninhabited world of Vontor, until the Hutts discovered the Si'Klaata Cluster and the strong, warrior-like races it hid.

The Hutts managed to sign the Klatooinans, Niktos, and Vodrans into perpetual servitude, and used many warriors during the Third Battle of Vontor. This was the decisive battle against Xim, and left the Hutts in control of large areas of the galaxy. However, the Hutts could not escape their own greedy nature, and soon began to covet each other’s holdings. Interclan wars broke out, and the clans eventually broke off relations with each other.

When they realized that this was bad for business, they began exchanging messengers. The Hutts took to killing the messengers if they didn’t like the message, but this further impaired business. So, the Hutts made a pact which recognized messengers as sacrosanct. As a race, Hutts do not trust any other races, a trait that stems from an incident in which all prominent Hutts on Nal Hutta were executed by an assassin.