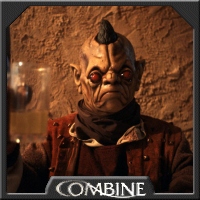 The Advozsec are an alien race that are humanoid in form and characterized by their short stature, large black eyes and the small single horn on their almost hairless heads. Their ears are pointed to maximize aural sensitivity and their large eyes allow them to see in the murky light. Their skin color ranges from yellow to brown. Strict vegetarians, they can become violently ill if they consume any form of meat.

The Advozsec are native to Riflor, a planet with an atmosphere that is usually filled with ash from volcanic eruptions which often blots out the sunlight. The darkened skies lead to severe drops in temperature, so the Advozsec prefer to live near geothermal springs for the heat they provide. Unfortunately, the region surrounding these springs tends to be unstable, and those living there frequently have their settlements destroyed by tectonic activity.

The frequent need to rebuild from devastation has instilled a deep cultural detachment from material goods among the Advozsec, and they refrain from making any kind of long term plans. Furthermore, they are often characterized as having a pessimistic, selfish and paranoid outlook on life. Despite advancements in technology which allow the race to make more permanent structures, the prevalent attitude tends toward the cynical. Because of these traits, it's not uncommon to find an Advoze working in some form of corporate management -- taking advantage of their natural skepticism and acute oversight.