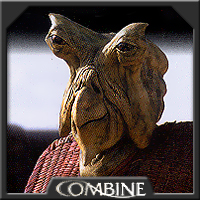 The Ishi Tib are an amphibious, humanoid race native to Tibrin, and easily recognizable by their huge eyes on stalks and beak-like mouths. Their facial structure is often described as being star-shaped. A layer of thick, moist skin keeps water in their bodies long enough for them to live outside of the water comfortably, for a time. Land-dwelling members of the species must take a salt water bath every thirty hours or so to prevent internal bleeding and eventual death. Internal lungs that work much like gills allow the species to breath underwater just as well (and better) than they do above water.

These green-skinned humanoids evolved from a rather bony fish species that used their high intelligence and ability to jump out of the water onto coral reefs to escape predators. It was on these same coral reefs that the first Ishi Tib eventually settled and created their cities. They organized into groups of around 10,000 members each called schools. In similar fashion to other governments around the galaxy, these schools were governed by elected officials who represented their school. Elections in these schools were held annually, giving the representative only a short term in power unless they were re-elected.

Modern Ishi Tib society follows a very similar model to the original one. Cities use underwater farms built around the foundation coral to sustain the large populations. Everything from seaweed to crustaceans and many species of fish are produced in mass to feed the Ishi Tib people. One of the most important values in their culture is conservation of the environment and being good stewards of their planet. This is not to be confused with their being totally docile and peaceful, as they can be quite vicious in combat and often use their beaks to tear an opponent to pieces.

Marriage is non-existent among the Ishi Tib. Instead reproduction is based on the needs of the school and fertilized eggs are laid near the reefs. Hatchlings are raised communally, and as a result parents and children remain unknown to each other. Ishi Tib prefer loud music with much clanging and flashing lights. When discovered by space-faring races, the Ishi Tib proved to be great organizers who were meticulous in everything they did. Many organizations hired them to help organize their cities, discuss strategy with their army commanders, and even negotiate treaties. Even though only a minority of them ever leave Tibrin, they are well-known around the galaxy for holding executive positions within top companies and governments using their innate diplomatic and organizational skills.