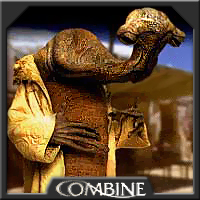 Ithorians hail from the Ottega star system, in the Lesser Plooriod Cluster. They are called 'Hammerheads' by other races because of their most prominent and unusual feature. Ithorians have a long neck which curls forward and ends in a t-shaped dome. Ithorians speak the common language of the galaxy, albeit with a peculiar twist. Ithorians have two mouths, one on each side of the long, curling neck. This produces a 'stereo' effect when they speak which can be disconcerting to beings not familiar with them. Their native language fully employs this stereo effect, making it one of the most interesting sounding but difficult languages to speak.

Ithor, the fourth planet in the Ottega star system, is a lush, tropical world teeming with a wide variety of animal and plant life. Much of it has been tamed by the Ithorians, but there are still large regions of wild, unexplored territory. Two land masses and numerous islands of Ithor endure in their original, undeveloped state. Even the 'developed' continents appear as overgrown jungles to most other star travelers. The Ithor climate is tropical, and humans and many humanoid races can function on the planet, although some find the heat and humidity troubling. It is a world where technology and nature beautifully co-exist, supporting an advanced and peaceful civilization overseen by the ecologically-minded Ithorians.

The Ithorians live in what have been described as 'herds'. They are actually cities that migrate about the planet's three civilized continents. Each herd is a complex technological wonder: disk shaped and several levels high, herds ride above the surface on repulsorlift engines, housing the Ithorians and serving as centers of commerce, industry, and culture. Developed over long millennia, herds represent a logical, elegant solution to the problem of conserving the ecological system of Ithor while providing the Ithorians with a technological society. Herbivores, the Ithorians 'graze' on the vegetation of their planet without actually setting foot on its surface, and their belief in ecological equality prohibits them from taking more than each herd's needs from the soil. In practice, for each vegetable a herd consumes it plants two. This way of life led quite naturally to star travel early in Ithorian history: Ithorian ships are merely spacegoing 'herds' equipped with hyperdrives. They travel the spaceways like caravans, bringing unusual merchandise from one end of the galaxy to the other. Each herd-spacecraft is designed for Ithorian comfort, built to mimic the world's environment. They are indoor jungles complete with artificial storms, humid atmospheres, planetary wildlife, and vast corridors of lush vegetation.

For all their strange appearance and customs, Ithorians are gentle and peace-loving. They manifest great respect for all life forms, and disturb their planet's ecology as little as possible. They remain in their floating herds, venturing onto the planet's surface only when necessary. But Ithorians are also curious and gregarious, which is perhaps why they went into space as merchants. As such, they are welcomed throughout the galaxy. In many systems in the Outer Rim Territories, the arrival of an Ithor herd is cause for celebration.

While Hammerheads believe in peaceful coexistence, they also believe in protecting what they hold dear. Starfaring herds employ deflector shields and weapons to suppress smugglers and pirates. They are no match, however, for Imperial warships. Ithor itself boasts a highly-advanced defensive system, allowing the planet-bound herds to travel armament free.

While many skills are needed to keep the herds going, most Ithorians opt for training in the agricultural, artistic, or diplomatic fields, in addition to mercantile and spacefaring occupations. Many even choose to become ecological priests, serving the 'Mother Jungle' and preserving nature on Ithor.

The people of Ithor practice a communal form of government. Each herd is autonomous and self-supporting. Once every Ithorian season (about five standard years), the herds gather for 'the Meet'. A grand sight for off-worlders to witness, the Meet draws tourists from across the galaxy. The herds join one to another in a regal ceremony that resembles a majestic dance above the jungle. At the Meet, storytellers spin tales of wonder, families honor longstanding commitments, couples exchange marriage vows, and Ithorians in general debate their place in the galaxy. Any space herds in the vicinity participate, but smaller versions of the Meet are held in deep space for those Ithorians far from the planet when the 'Time of Meeting' comes.

The space herds trade with both the Empire and the Rebel Alliance, but wish to avoid trouble. They have no reason to favor one side or the other, so long as they are allowed to continue their activities in peace.