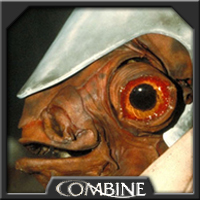 The Mon Calamari are a bipedal, amphibious race who share the same homeworld as the Quarren. Many xenobiologists believe the Mon Calamari are descended from squid, but evolved a more humanoid appearance than the Quarren. The males have salmon-colored skin, lobed heads, and protruding eyes. The females are more streamlined, with olive-colored markings on their salmon skin.

The Mon Cal, as they are often called, are shore-dwellers, land creatures who prefer to live near the water. Early Mon Cal civilizations fed on the creatures they found in the shallows, and developed an advanced aquaculture system. When they discovered the Quarren - the other intelligent race on Calamari, who live in the ocean deeps - the two races combined to create a symbiotic society in which both races flourished.

Together, they built the huge floating cities that populated Calamari's oceans. Unlike the Quarren, the Mon Cal desired to travel to the stars, and began experimenting with space flight. Their first starships were quite successful, but their dreams of a peaceful life in space were cut short. As with most other alien races, the Mon Cal were simply exploring the galaxy when they were discovered by the Empire. However, the Mon Cal were one of the few races that put up a fight in the face of certain doom. The normally-peaceful Mon Cal learned quickly from the tactics of the Imperial invaders, and were able to drive them off. 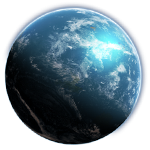